A Pitch for Native Plants

One of the best things you can do for your garden is to use native plants. Native plants have a number of benefits that should be of interest to the homeowner. While everyone has a different idea on how to landscape their properties, the common denominator should be to keep the work to a minimum, to save money and to help the environment.

How can using native plants save you money. Often times when you see native plants for sale the cost is a little more than exotic plants. This may… Continue

Your Couch is Hazardous to Your Health

I guess most people have figured out that lying around on a couch being a "couch potato" is certainly not one of the best things we can do for our health. Lack of exercise is one of the leading causes of the the obesity epidemic in the world today.

We are all becoming more aware of how important it is to know our carbon footprint. But not a lot of people know just what an impact the amount of water we use has on this planet. As Americans were are perhaps the most wasteful country in the world when it comes to water. We use nearly three time the amount of water than other countries. Life here in the US is much to easy for the majority of the people. We are so accustomed to just turning on the tap and having fresh water come out, we don't… Continue 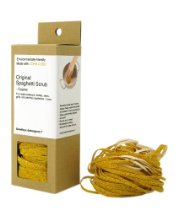 Want to clean your house in a fun and funky eco-friendly way? Check out the Spaghetti
Scrub, an environmentally friendly scrubber that is tough on dirt but gentle on the environment. The Spaghetti Scrub looks like a wad of spaghetti, but that's where its resemblance to that mushy meal ends.
Made of corn cob, the Spaghetti… Continue

Learning to read labels is one of the best going green habits you can develop. Avoiding toxic chemicals is as simple as reading the ingredients on the label and avoiding products that are known to be toxic.

Another easy way to avoid toxic chemicals is to buy local, and by that I mean to purchase items that are not made in China. China has one of the worst reputations for polluting the air with their coal burning manufacturing plants. Although they have made efforts to… Continue

For anyone looking to earn an income from home, Plug Into Green Profits may be just the solution. Plug Into Green Profits is a unique hybrid franchise/home business that combines the duplicability of a franchise with the low start up costs of a home based business. Not only will you earn a serious income, you will help the planet by promoting green affiliate products. The Green Movement is exploding and this is your opportunity to get in on the ground level of a niche that is… Continue

When a lot of people think about going organic they think of the awful cardboard tasting granola bars of the yester-years, but that simply isn't the case. In fact, since organic foods are free of pesticides, fertilizers and other toxic chemicals, they are in fact often better tasting than the non-organic counterparts.
Switching to to tally organic foods will increase your food bill, but may in fact decrease your health care costs as you… Continue

I just posted some very interesting information on Teflon toxicity on my website AGreenLady.com
Previously it was thought that the toxic gasses given off by Teflon occurs only at super high heat. A new study says otherwise. Read more a… Continue

I am shouting it from the rooftops! I have completed the course requirements, and I am now a Certified Green Living Coach.
As more and more people are going green and looking for ways to live healthier, they are looking for more sound information on how to achieve that goal.

I am one of the first students to receive certification from the Spencer Institute's Green Living Coaching Program.
My website, http:/AGreenLady.com offers timely going… Continue

If I could impart one bit of going green advice that is easy to implement it’s getting rid of the candles in your home. One of the worst things you could be doing to degrade the quality of the air in your home is to burn traditional candles.

With the advent of the Internet, shopping has changed dramatically. In years past, shopping was mostly done in local stores. Going
into the “big city” to shop was often a once a year experience. If it wasn’t made in your local area, chances
are you weren’t going to buy or have access to certain items. Catalog shopping was developed by giants such
as Sears and Montgomery Ward, and the ability to purchase more items via mail helped expand
the shopping…

What Does Going Green Mean?

Every day in the media, we see something about going green. Whether it is a business that has declared that it is going green, an environmental group telling us that we should be going green, or some product that uses the term going green to hawk their wares, green is definitely the in thing these days. But what does going green really mean?

There is really no specific definition of going green because it has such wide implications. The simple act of recycling an aluminum can, to…