Last night, temperatures here dipped below freezing. I had brought some plants in containers indoors, and had covered other plants that were at risk with cotton sheets that we use for that purpose and as drop cloths when doing home improvement projects. My garden is rather diverse in the number of species, and I am something of a collector of various types of plants. Since I could not cover everything, I attempted to save at least one frost-susceptible plant of each species that I have. I did… Continue

The blackberry lily or leopard lily, otherwise known as freckleface is really an orange iris that will grow in Florida but is not a native plant. I am growing these from seeds.

The Spanish iris will grow in Florida, but is from the Mediterranean area. Here is a picture of two blooms on my plant. 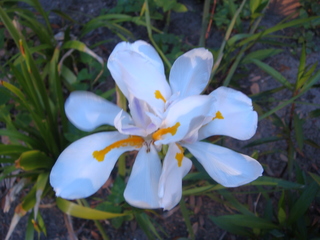 The Walking Iris is not really an iris, but looks like one. It is also known as an Apostle's Sword or Apostle's Flower. For more… Continue

It was predicted to be 34F degrees last night, 32Fdegrees tonight and 28F degrees Friday night. Luckily it rained recently, which is good, because cold weather is less dangerous for plants if the soil is not dry. Yesterday we brought some frost- sensitive plants that were in containers indoors. These included some out of season tomatoes, zucchini, small turnip and onion plants, some basil, oregano, a starfish cactus, an unusual orchid, the begonias, some small pepper plants, the avocado trees… Continue

Lately I have been volunteering at the botanical gardens with the native plants. There are certain plants that we want to keep and grow and other very common plants that are considered weeds. My work has included pruning shrubs to encourage fuller growth, weeding and watering. Also, I have made a list of plant names to put on a table of information. I have plans to research each plant and find out information, such as toxicity, medicinal uses, and what types of wildlife, such as birds,… Continue

February 8: volunteered picking and washing citrus for the Rare Fruit Council booth at the fair.

February 16: installed wooden border in area where we amended the soil (Sometime before I also put in a drywell where the rain splashes down from the roof.)

February 21: worked with begonias and staked out an area where I turned the soil,… Continue

Agriculture, Fairs and Farmers Markets and How I Have Gardened with Less Land

There is going to be a fair in Tampa off of Highway 301 next week. The Rare Fruit Council is going to have a booth there. From the advertisements on TV lately it seems that the fair has gone more towards entertainment and away from agriculture. There are photos of Vegas-style casino gambling and dancing girls as well as the footage of roller coasters and ferris wheels. I might visit the fair to see if the advertisements are accurate or if there is still a focus on agriculture at the…

Today I went to a Rare Fruit Council meeting and learned about some fruit trees that grow in Mexico, South America and Africa. Most of the ones discussed do not tolerate Florida soil conditions. However, there were some people there who I know and one of them was selling passion fruit and another fruit called "sorrow" (see photo) because it is so bitter. You can only eat the inside of the passionfruit or use it to make a drink or in cooking. The sorrow is very bitter, and is best prepared by…

NOTE: It is important to wear gloves when handling peatmoss because of danger of contracting Sporotrichosis (Skilling).

There is a dead zone near the condo where the soil has been sandy and dry. It is a patch surrounded by concrete where the only things that have survived have been one tall palm tree and a shrub, one dwarf azalea (out of four planted) and one spearmint plant (out of three planted). So, since it is a shady area protected from the harsher weather changes because it is…

Yesterday, my husband brought home some plastic for covering the outdoor plants. We covered most of the vulnerable plants, and moved some of the plants in containers in. Later, after the sun had a chance to warm everything up, I uncovered the plants, and everything except the basil seems to have survived. I went over to the botanical gardens, but they said it was too cold to do much. We might need to cover the plants again tonight because it is supposed to get cold.

There might be a frost in Tampa Wednesday night. Water well, mulch well, move at-risk plants indoors or cover them, leave any strings of lights in garden up and lit overnight, leave any drip irrigation systems on. (Source: Seminar at Tampa Bay Garden Club)